The EU Benchmarks Regulation provides for the administration, contributors and use of indices (for example reference rates, foreign exchange rates as well as equity and commodity indices). The purpose of the Regulation is to ensure the accuracy, integrity, reliability and independence of the process of determining benchmarks. The background of the Regulation consists of cases of severe manipulation of benchmarks for interest rates, such as Libor and Euribor, and claims of manipulation of benchmarks for energy, oil and currencies. Failures in, or doubts about, the accuracy and integrity of indices used as benchmarks can undermine market confidence in general, cause losses to consumers and investors and distort the real economy.

Who does the Benchmarks Regulation apply to?

The Benchmarks Regulation concerns the administrators, contributors and users of benchmarks.

According to the Regulation, an index is any figure

According to the Regulation, the administrator of a benchmark is the natural or legal person that has control over the provision of a benchmark. The administrator must apply for authorisation or registration by the competent authority (see below). The European Securities and Markets Authority (ESMA) maintains a public register on authorised and registered administrators of benchmarks, which is available on the ESMA website. Administrators are subject to different requirements depending on the type of  benchmark.

The Regulation divides benchmarks into the following six different types:

What are supervised entities?

The use of a benchmark means, in accordance with the Regulation

Supervised entities (see above) may not, after the transition period, use indices which are benchmarks under the Regulation, unless the administrator of the benchmark is included in the ESMA register. This prohibition also applies to indices from third, non-EU countries. Supervised entities using a benchmark must also have a continuity plan in place for the event that the benchmark changes materially or its provision ends, and it must and shall reflect this plan in the contractual relationship with clients.

Information provided on consumer credit contracts within the scope of application of the Regulation shall indicate the name of the benchmark and its administrator as well as the potential impacts of the use of the benchmark on the consumer.

Where the object of a prospectus to be published under the Securities Markets Act or Act on Common Funds is transferable securities or other investment products that reference a benchmark, the issuer, offeror, or person asking for admission to trade on a regulated market shall ensure that the prospectus also includes clear and prominent information stating whether the benchmark is provided by an administrator included in the ESMA register.

Authorisation and registration of an administrator of benchmarks

Benchmark providers based in an EU member state must either have an authorisation or be registered. The following chart indicates in a nutshell, which requirement is applicable. 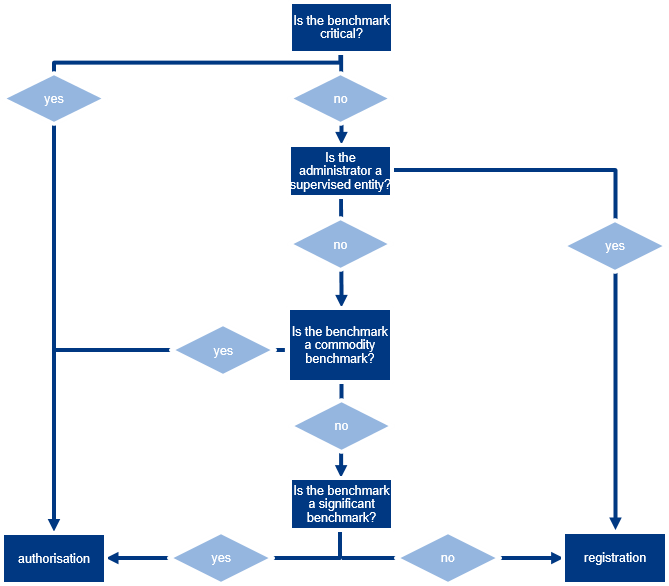 Supervised entities within the EU may use benchmarks whose administrators are from third countries, that is, outside the EU, only if the benchmark and its administrator are included in the register maintained by ESMA. There are three ways of ensuring this:

The Benchmarks Regulation is directly applicable regulation in the Member States.

The Regulation entered into force on 30 June 2016 but, excluding certain exemptions on critical benchmarks, it was not applicable until 1 January 2018.

According to ESMA's interpretation, such benchmarks provided by an administrator located in a third country that are not included in the ESMA register may also be used by supervised entities until 31 December 2023, but thereafter only if the reference to such a benchmark for the financial instrument or contract or the measurement of performance of an investment fund is concerned with the period before 31 December 2023.

Supervised entities must have continuity plans required by the Regulation in place from 1 January 2018, and subsequently they must also be referred to in new client contracts. According to ESMA's interpretation, supervised entities must also do their best to seek to align client contracts concluded before 1 January 2018 with the Regulation wherever practicable.

The requirements of the Regulation concerning consumer credit contracts also took effect in Finland on 1 January 2018.

Regulation (EU) 2016/1011, of the European Parliament and of the Council of 8 June 2016 on indices used as benchmarks in financial instruments and financial contracts or to measure the performance of investment funds and amending Directives 2008/48/EC and 2014/17/EU and Regulation (EU) No 596/2014 (Benchmarks Regulation, in some sources also Benchmark Regulation)

ESMA Q&A on the Benchmark Regulation

HE 151/2017 Government proposal to the Parliament on Acts amending the Investment Firms Act and Act on Trading in Financial Instruments, and on certain related Acts (in Finnish)