During the review year, the global COVID-19 pandemic continued for a second successive year. The economies of the OECD1 countries recovered very quickly from the recession of the previous year. Consumption, investment and trade increased. This growth was supported by economic policy. Central banks’ monetary policy remained accommodative through securities purchases and low policy rates, while government borrowing continued to increase – these factors contributing to the support of financial market activity. As the COVID-19 pandemic continued, however, there was, and still is, high uncertainty surrounding economic developments. The full impact of the pandemic on different sectors of the economy or on the behaviour of households and businesses is yet to be seen.

The most significant change in the international economy in the review year was the acceleration of inflation. This was due to increased demand as the economy recovered, supply bottlenecks in the international economy as a result of the pandemic, and a sharp rise in energy prices. In the euro area, the rise in consumer prices was the fastest since the creation of the euro area, and in the United States the fastest for nearly 40 years. Inflation expectations based on market prices also rose.

The acceleration of inflation did not significantly affect the broader pricing of financial markets during the financial year. Changes in long-term interest rates were relatively small during the review year and in the euro area, for example, government bond yields with a maturity of ten years were consistently very low or negative. Similarly, inflation-adjusted real interest rates remained negative and many different broad-based stress or volatility indices describing the state of financial markets reflected market composure.

On the equity markets, equity indices everywhere rose due, among other things, to the continued good performance of companies and the stimulative economic policy. Equity valuation levels remained generally high, although at the end of the year equity prices fluctuated more than at the beginning of the year. Pricing in the equity and financial markets was also impacted by new phenomena. High-risk equity trading carried out by small investors active in social media had a strong impact on the valuation trends of individual shares. Trading volumes in many cryptocurrencies increased. Similarly, combating climate change and the demand for sustainable financing increasingly affected financial sector and market activities during the review year.

In Finland, the development of the economy and financial markets paralleled international trends. The fastest phase of economic recovery was in the year under review. The situation and profitability of companies in different sectors varied widely amidst the COVID-19 pandemic, but many economic indicators developed positively. A high number of residential mortgage loans were taken, the housing market was buoyant and house prices rose, particularly in the early part of the year. Towards the end of the year, the rise in prices was more moderate. Household indebtedness continued to rise as debt grew faster than income.

At the beginning of 2022, operating environment risks have increased rapidly. Continued higher-than-expected inflation has brought forward expectations of monetary policy tightening, which has led to a rise in interest rates and a sharp fall in equity market indices in January. In addition, the deterioration of the geopolitical situation, in particular, poses significant and, in some cases, difficult-to-assess risks for financial sector actors and, more broadly, for the operating environment as a whole.

The operating profit of the banking sector increased compared to the previous year, driven by positive development of income and lower impairments than in the comparison year. Net interest income was still the most significant income item for Finnish banks, although the share accounted for by commissions and fees has risen in recent years. In addition to growth of the credit stock, the rise in net interest income was supported by an increase in cheap central bank financing and the consequent lower interest expenses. The level of non-performing loans remained moderate and was still among the lowest in Europe. 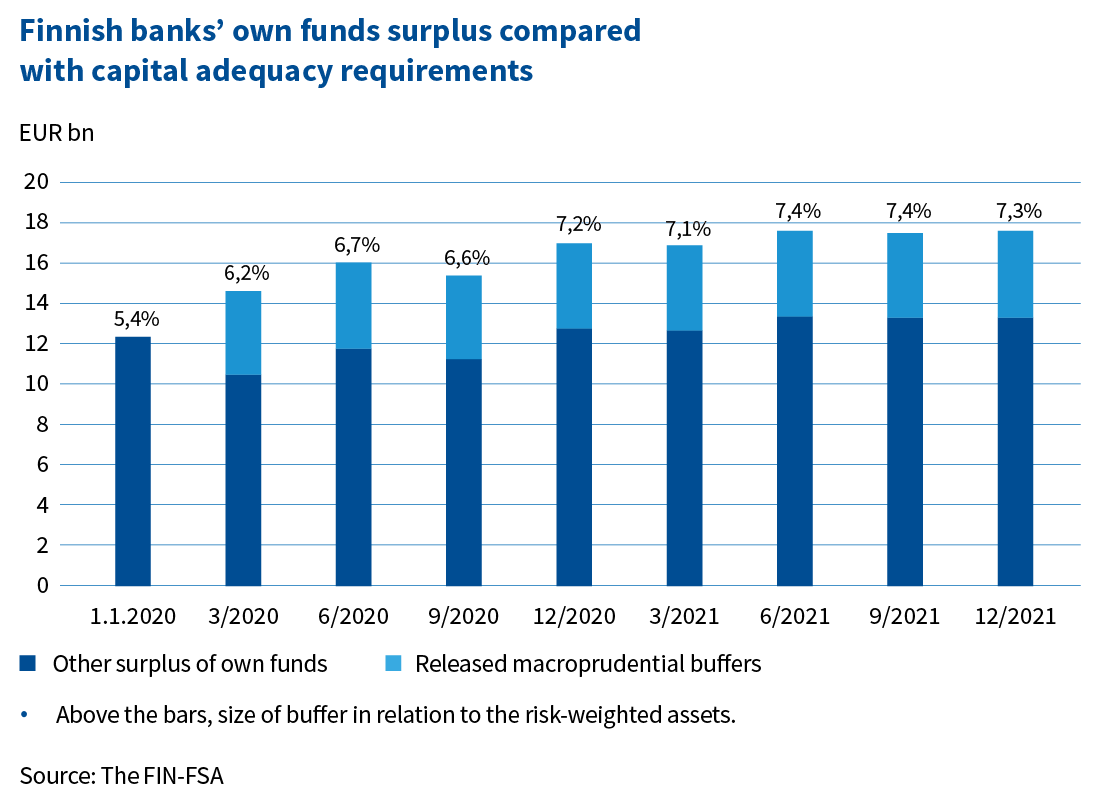 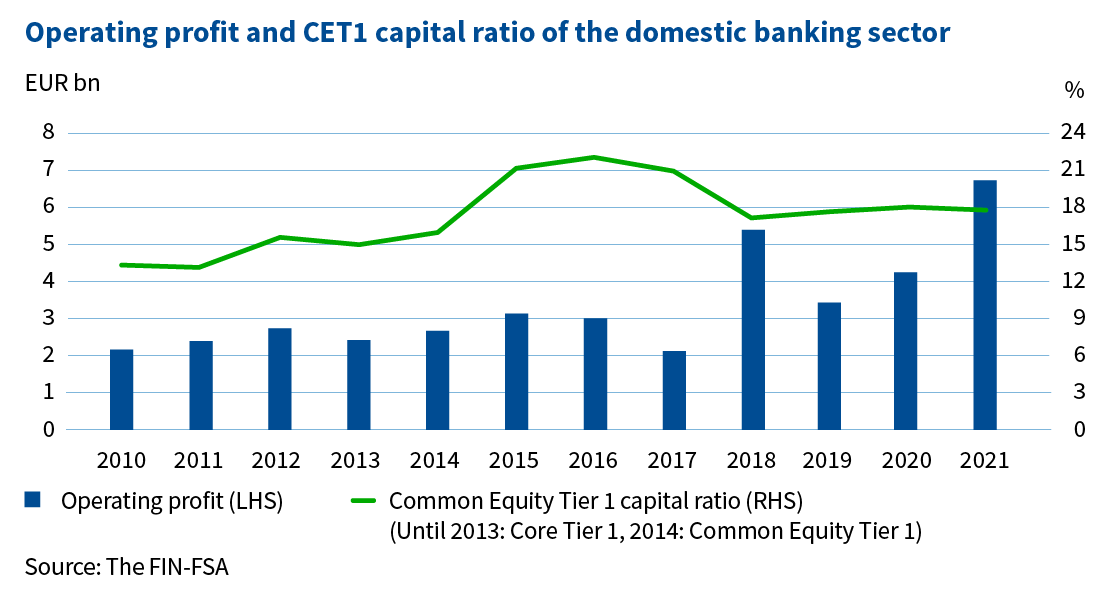 The solvency ratio of the life insurance sector strengthened during the review year, although it declined in the last quarter of the year. The rise in interest rates in the early part of the year reduced technical provisions in relation to investment assets. The amount of Solvency II own funds increased to a record level. Fixed-income investment losses weighed on total investment returns, but equities performed very well. 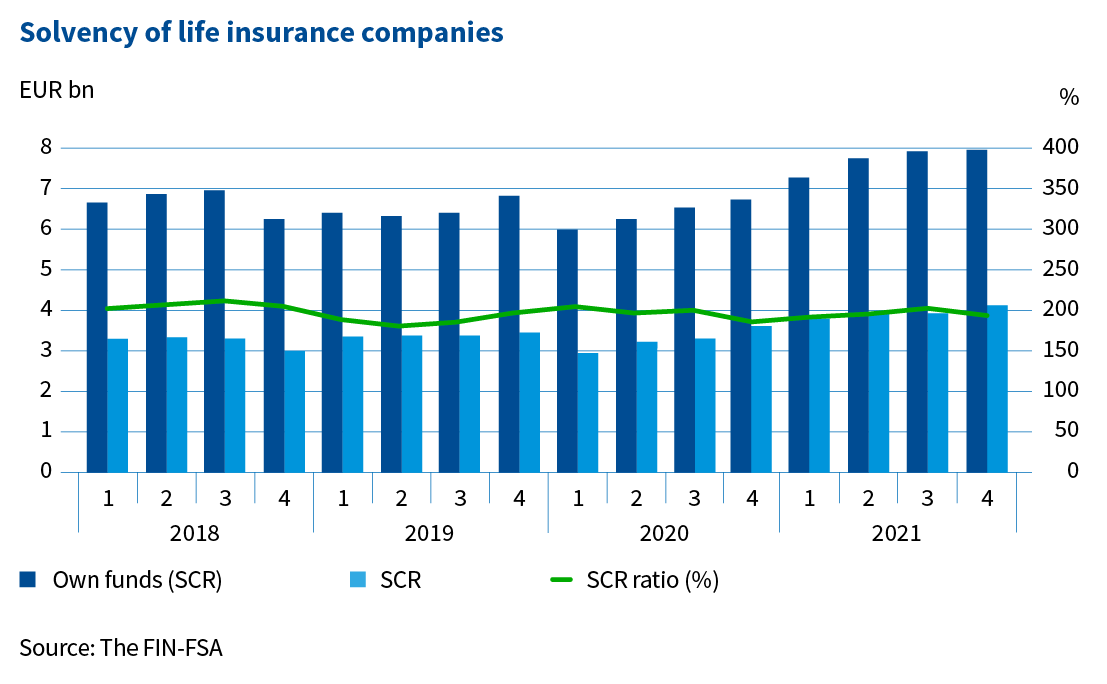 Non-life insurance companies’ solvency strengthened by growth in own funds

The solvency ratio of the non-life insurance sector reached its highest level since the Solvency II regime took effect, i.e. in 2016. Investment returns and income from insurance business increased own funds in each quarter of the year under review, and solvency strengthened. 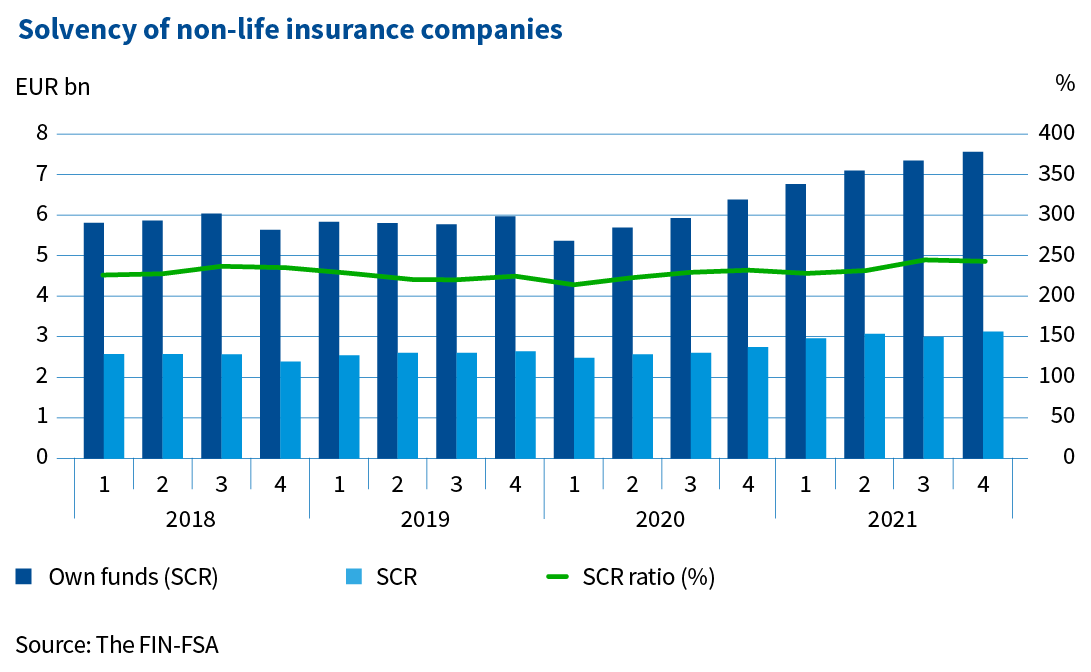 The wage bill started to rise again in the review year after a dip caused by the coronavirus situation. 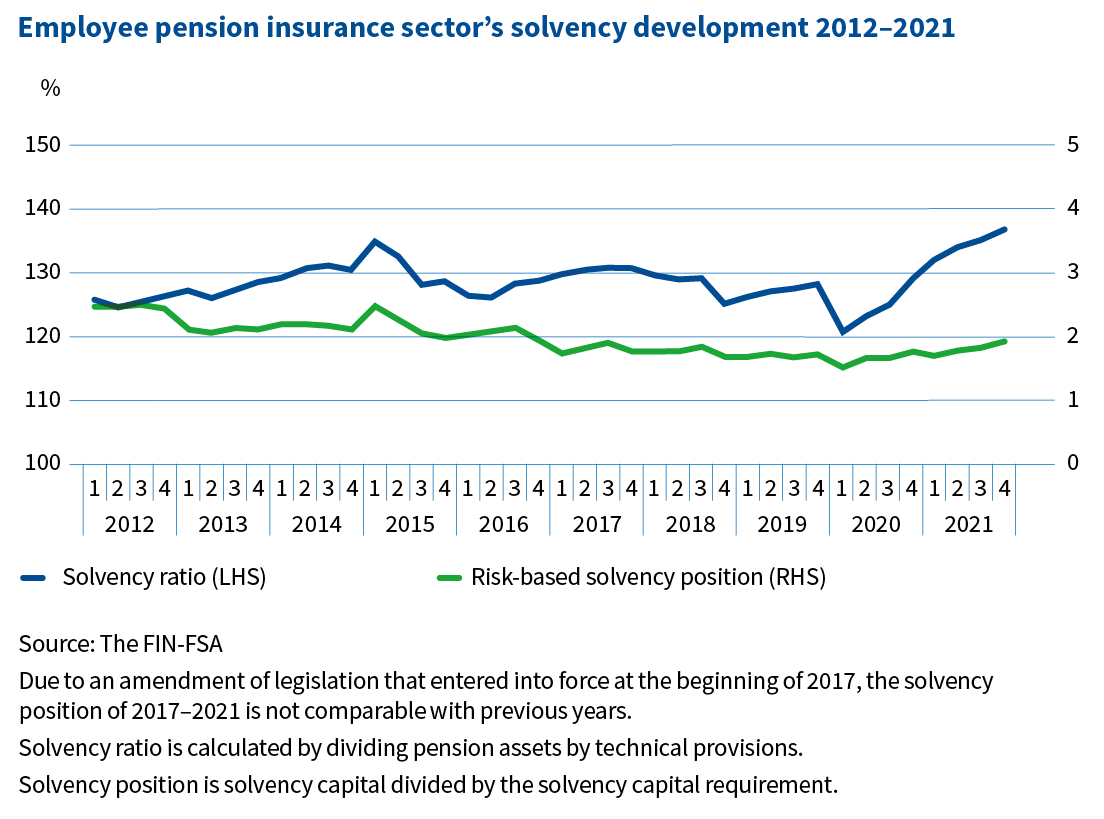 FIN-FSA-related topics most visible in the media